As Young as You Feel

Here at 39 and Holding Club it's ATT-I-TUDE that keeps us young. While seeking new ways to enjoy, explore, and exploit our youthful 'tude, I found and adopted our "official" annual holiday ...

One day, I poked around on the 'Net for more young at heart activities to tell you about and stumbled on an oft-spoken phrase, "as young as you feel"—and voila! In a few more clicks ... "As Young as You Feel 'Day'," a special observance holiday popped up, and a delightful As Young as You Feel movie! 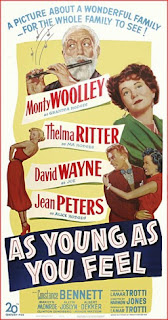 As Young as You Feel Day is on March 22nd every year, following St. Patrick’s Day, which means you have a few days to recuperate from Irish cream and stout malt, and feel your oats again.

BTW, I’ve been searching for the origin of the day, so if anyone knows how it became established, send me a note!

In the meantime, celebrate our new annual excuse to party, As Young as You Feel Day, with a viewing of the vintage movie that was a stepping stone for one of the most iconic actresses of the 20th century. [Keep reading ... this is just a hint ...]

With a swooping wave of my magic Internet search wand, I learned that the movie is a real treasure. Released in 1951, As Young as You Feel was the second film at the beginning of playwright Paddy Chayefsky’s storied career.

When John Hodges is forced into retirement by company policy, he "goes rogue," dying his hair and beard to appear younger. [Uh, none of us do that ... right?!]

Armed with att-i-tude, he masquerades just long enough as the president of his company's parent corporation, to amend the policy. Of course he is laughingly caught. But in 1951, Hollywood was full of happy endings.

Yeah, I know what you're thinking—how could he possibly get away with such a thin disguise? Doesn't anyone know what the real company president looks like? Of course. But back then without the Internet, LinkedIn, Facebook and Twitter, the ruse could be sustained for a short, amusingly sweet time. Ahhhhhh, the good ol' days!

If you love black-and-white movies, you’ll revel in this vintage comedy. WARNING! NO violence! NO nudity! NO explicit sex! … … … Huh. I just lost half of you, didn’t I?

Well, it’s fun to watch if only to see the clunky black desktop telephones, archaic newsprint machines, vintage cars, and everyone "dressed" for dinner.

One bit-part player however, is the real reason this film is revered by movie buffs. Most everyone, young and old, has at least heard of the sadly short life of blonde bombshell actress, Marilyn Monroe …

As Young as You Feel was one of Marilyn's first Hollywood film roles. If you look reeeeeallll close you can spot her name at the bottom of the movie promo above; but it was non-existent in some original posters.

Marilyn’s sexy-smart reputation was personified as a feisty secretary in this movie. She made her roll so engaging (at least for the guys) that soon after, Marilyn Monroe became a household name—emulated by women and lusted after by the president and all his men.

The film provided a substantial catalyst to Marilyn's success, as mentioned in a Collier’s September 1951 issue, “More recently, with ears cocked to the whistles and wolf calls that have greeted Miss Monroe’s appearance as the provocative secretary in As Young As You Feel, shrewd exhibitors have begun for the first time to put her name on their theater marquees.”

Although you won’t be subjected to the extreme sex and violence pervasive in today’s news ... ummm, I mean films ... the movie is endearingly entertaining.

But there IS an imminent danger at The End ... lingering nostalgia is possible, as you wallow in the simplicity of non-electric typewriters, office squawk-boxes, and pen-and-paper dictation. (But certainly not missed are ashtrays on many desks and cigarette smoke permeating the air.)

Nostalgia is fleeting, however, so enjoy the movie, use your new-fangled phone to instantly post reviews and remember … you’re only AS YOUNG AS YOU FEEL!! (Which is based on your ATT-I-TUDE!)