So with a flip of the calendar page, we slip into 2019, turning waning Gen Xers into 39ers—those born in 1980. Welcome to the most elite and inane club on Earth and Happy New Year!

What’s so special about 1980? To start with, it was a leap year! We’ll have fun with that in February. But first, let’s explore the month that offers an open door to new beginnings, its apt name originating from Latin for door (ianua) …

39 Years Ago this Month ~ January 1980
Many of us dreamily planned our “Escape” with Rupert Holmes as he topped the radio charts this month. Something Sir Paul might also have considered … 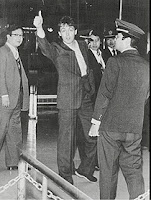 January 16th: Arriving in Tokyo for a concert tour, McCartney and Wings ended up grounded. That’s what happens when you travel with close to a half-pound of MJ in your luggage “for personal use.” That’s a lot of personal toking. The Japanese authorities weren’t buying it—nor allowing him to buy his way out—totally. Paul spent nine days in the Tokyo Narcotics Detention Center, and deported. My, how things have changed!

January 29th: Perhaps a mind-blowing walk around The British Toy and Hobby Fair (Earl’s Court, London) would have been safer for McCartney. There, he could have discovered the now-ubiquitous Rubik’s Cube that made a splashy international entrance into educational toys. Though invented in 1974, Professor Ernõ Rubik had no idea his educational toy would “go viral” when young, eager minds demanded it. It still boggles the mind …
For 39ers who Follow the Stars …

January 2019 is a business-oriented month for many, and the strategically minded Capricorn (12/22/18-01/19/19) is no slouch in business. Don’t be surprised if you see them busily listing their financial goals for the year. Caps are of the few who will actually attain them! Not known for their flexibility, try to help your early January 39er friends to be more flexible. They may not admit it, but they need you.
The latter part of January caters to the quirky, free-spirited Aquarians (01/20-02/18). As Tarot.com explains, “Aquarius' eternal quest for knowledge turns up notions that range from brilliant to insane.” I’ve known a few of them! Aquarians are never lacking for witty and entertaining conversation, but you need to help these personally aloof 39ers explore their emotions a little more.

Aging with ATT-i-tude Platitude
Last summer our favorite orange tabby cat, Garfield, turned 40. His buddy Nermal couldn’t resist a dig, but complimented him instead. It went like this … Nermal: So, you’re now 40. Garfield: Yes, I am.
They look at each other for a moment … then, a little disconcerted, Nermal: You look good … Garfield: Aging well is the best revenge.
~ Jim Davis did it again! Remember, LIFE is ATT-i-tude and Garfield has it in spades!