Oh my, I’m so naughty – December UN-birthday fun is very late – please don’t send me a lump of coal!

My procrastination however, does not mean that December 39ers are any less important – in fact, they may be the most important of the year!

December not only holds spiritual meaning for many of us, but signifies ending and renewal as a society, as well. So let’s get into it!

Just like a riff from Billy Gibbons’ Rockin’ guitar, Scorpio fades intensely into Sagittarius … crashing with an explosive crescendo that marks an exciting, definitive year-end, and leads into the promising New Year's beginning, with Capricorn.

Sagittarius is an esteemed elder member of the 88 modern constellations. It’s one of the 48 twinkly patterns listed by Ptolemy, 2nd century Greco-Egyptian writer, astronomer, mathematician, geographer, and astrologer. Whew! How do you pack all of that into one life?! Ah yes, it was before the Internet …
In this month dominated by red and green, Sags stride regally to the beat of a different drum in shades of purple, offset by glowing turquoise, December’s gemstone symbol of good fortune and success.

So it should come as no surprise that a plethora of famous folks ride the Sagittarius centaur through much of the month, since Sags are famous as the life of the party! 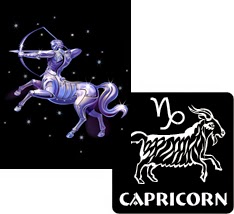 Dick Van Dyke laughs his way into his 89th year (Dec. 13), Brad Pitt makes 51 look good (Dec. 18), and Ryan Seacrest jumps the 4-0 hurdle to join us in the 39 and Holding Club, celebrating with Santa on Christmas Eve.

By the 22nd, we’re following the cool, calm and collected temperament of the irrepressible Capricorn goats. More famed holly-babies:

Christmas Day brings “Changes in Latitudes, Changes in ATT-I-TUDES”’ Jimmy Buffett at a spry 68, along with actress Sissy Spacek (65), and singer-songwriter Annie Lennox (60).

After the sparkle and sacred spirit of December, we take stock of life, love, and the liberation of a New Year … of UN-birthdays. Cheers to your Holidays, however you celebrate!