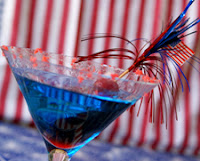 July 39ers Celebrate the Red-White-and-Blue!
Isn’t it cool that everybody celebrates your birth month, July 39ers?! Well, ok, many are partying for Independence Day—and then we’ll party on ‘til Labor Day—but hey, your “liberated youth” is worth a toast too!

So CHEERS to your UN-birthday 39ers, as we go red-white-and-blue for the rest of the summer.

39 Years Ago this Month ~ July 1978
21st – Peter Frampton may have experienced second thoughts about starring in a Beatles-related music film without The Beatles; even though the venerable Bee Gees provided the soundtrack. Sgt.Pepper’s Lonely Hearts Club Band debuted to vicious reviews and low box office sales. Nevertheless, it’s fondly remembered thirty-nine years later, along with the original Beatles album of the same name, celebrating its 50th year (1967).

What other summer hot stuff was goin’ on? Throughout July 1978 we spent our sunburned evenings enjoying the boob tube’s MASH, One Day At A Time, Little House on the Prairie, and Laverne and Shirley. Back in the day … as today … we watched shows with ATT-i-tude!

July’s gemstone via the American Gem Society is celebrated as the royal Ruby, but … “In 1912, in an effort to standardize birthstones, the (American) National Association of Jewelers met in Kansas and officially adopted a list.” (Wiki)

The Ruby, specified by modern calendar methods, is said to guarantee health, wisdom, wealth, and success in love. Ancient astrologers, however, proclaimed Cancer (June 21-July 22) should enjoy the qualities of the majestic emerald, while Leo (July 23-Aug 22), rules with the mysterious onyx.

Aging with ATT-i-tude Platitude
To keep the heart unwrinkled, to be hopeful, kindly, cheerful, reverent* ...  that is to triumph over old age.
~ Thomas Bailey Aldrich;1836 – 1907, author The Story of a Bad Boy. [*And sometimes mischievously irreverent 😉]